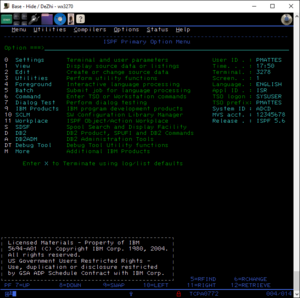 The x3270 Wiki is organized in two ways: Hierarchically and by categories.

Hierarchical pages have a slash (/) in their names. The pages under each specific emulator are generally organized in a hierarchy. For example, the page that describes how c3270 keymaps work is called c3270/keymap.

The Wiki also make extensive use of hyperlinks. Wherever possible, a term that is defined elsewhere in the Wiki is always represented by a hyperlink.

A note on versions

A good place to start is the Overview page. Also check out the FAQ, tutorials, and resources (settings) pages.

This Wiki is still under construction, so there may be broken links or missing information. It should improve over time.

Retrieved from "https://x3270.miraheze.org/w/index.php?title=Main_Page&oldid=3777"
Cookies help us deliver our services. By using our services, you agree to our use of cookies.